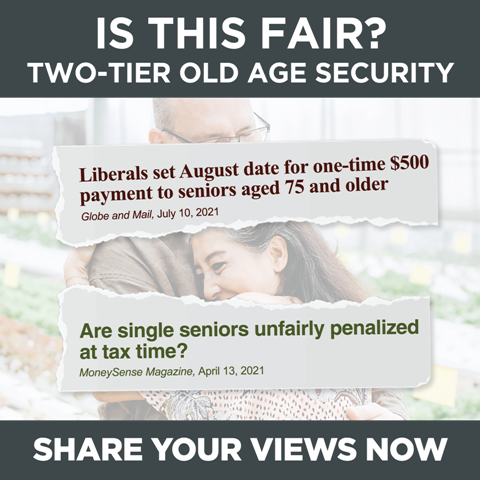 In mid-August your federal government will distribute one-time $500 cheques to individuals 75 years and older.

However, thousands of younger Oshawa seniors aged 65 to 74 are ineligible to receive this payment. Those aged 75 or older will also receive a permanent 10% increase to their monthly Old Age Security (OAS).

Again, though, Oshawa's younger seniors are left behind.

In July, the maximum OAS benefits increased by a mere $8.04 per month for all seniors. The Guaranteed Income Supplement (GIS) and allowances will also be adjusted for inflation.

In recent weeks, I've received a deluge of calls and letters from seniors of all ages left bewildered by the government's sense of tax 'fairness' and this new two-tier OAS system. This is creating unhealthy division among people of all ages and means.

In March my Opposition colleagues and I worked together to support a Bloc motion calling upon the government to permanently increase the OAS by $110 per month. I, along with MPs of all parties, except the Liberal caucus, voted to pass this motion. But just days later, the Trudeau government ignored the will of the House and created a two-tier OAS system for seniors.

Lately, I'm seeing more evidence of single seniors – especially single women – along with widows and widowers being hit hard. As single seniors cannot take advantage of income-splitting, many are left with huge tax holes and face the double 'sting' of losing a large portion of their partner or spouse's pension.

So, whether you’re a senior, soon to become a senior, or have a senior close to you, this unfairness is impacting thousands of Oshawa families and households.

Are you or a senior in your life feeling left behind? Should we fix this system of two-tier benefits by restoring the equitable treatment of all seniors?

As always, I’m very grateful for your time and effort.